This is it. This is the real thing guys. Have you ever been eating ribs and just wondered if that meat could be twice as thick, even more fatty, even more meaty, and without the obnoxious bone? Here... it is.. 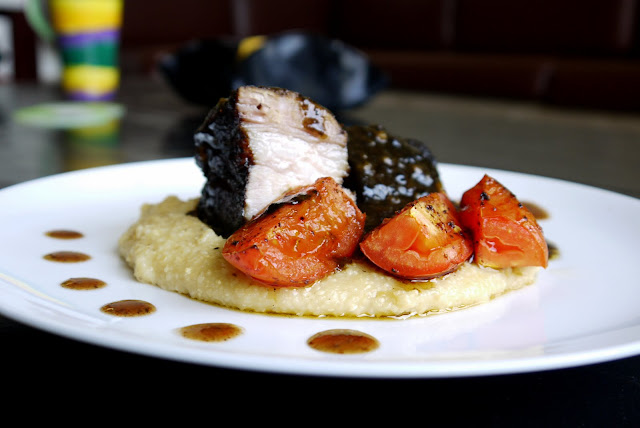 For real y'all. This is like having a giant chunk of nothing but rib meat. After every bite I took I laid on the ground with my eyes closed in pure bliss, partially because I was entering a food coma and partially because it was just so good. So good. The tomatoes were a delicious, colorful addition that made the sauce really sing. Instead of using a tomato based barbecue sauce, I thought some barbecue roasted tomatoes would incorporate some nice tomato flavor. I also kept it straight up Memphis style giving it a Willingham's dry rub and slow cookin' it, but I took it a little bit further and made a pan sauce out of all the fat that dripped out. I made up this recipe so nothing is really exact, but I'll try to help you guys recreate it if you're so inclined.
Posted by laurence faber at 5:19 PM 3 comments: 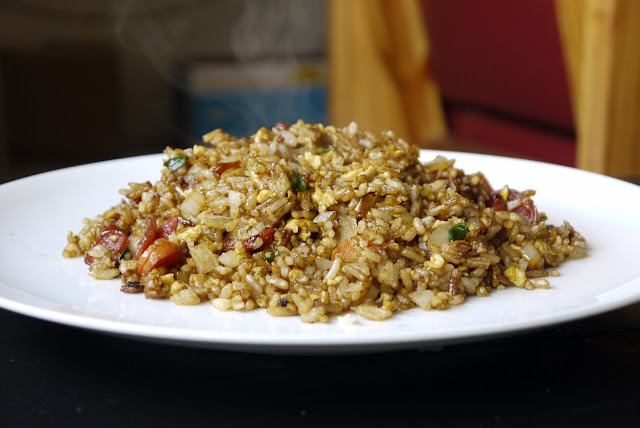 So I'm going to preface this blog post with a statement of complete truth: yes, you can make fried rice that tastes just like a Chinese restaurant's, but you probably won't be able to. In order to make true Chinese restaurant fried rice you basically need wok hei. Without wok hei you can still make damn good fried rice, as illustrated by the picture above..heh... Since finally inheriting the wok from my mom that has been used for nearly 30 years and has withstanded more heat than anything else I own, my fried rice has come a step closer. THANKS MAMA :) I used to have an outdoor wok burner and had some amazing Chinese dishes, but now I live in another city and in an apartment, so my dreams of wok hei'ing it up have vanished. This wok still works much better than my frying pan though. I'm also going to say that for the experienced, Young Chow Fried Rice (it's called many things, but that's what I say when I order it heheh) is the best fried rice ever created. It typically has almost no soy sauce and is completely reliant on the cooking ability of the chef and tastes better than any other rice dish ever created... it's so good.

Fried Rice with Lap Cheong
1 cup of DAY OLD ROOM TEMPERATURE cooked rice per serving
One small link of Chinese sausage aka lap cheong
Two cloves of garlic
A scallion diced
A quarter of an onion diced
A carrot diced
A mixture of light soy and dark soy. I'm not going to give an exact amount because everyone has different sauce preferences, but keep the mixture even. It gives the rice a good Chinese take out color and the light soy adds flavor.

Now this is a really easy recipe, but make sure that your burner is as high as it can go. Heat up your wok until it starts to slightly smoke, add oil and swirl it around. Once the oil starts smoking add the garlic and sausage. Stir fry until just before it burns and then add the vegetables except for the scallions (add a splash of rice wine now if you have some on hand). Cook for about 20 seconds and then add the rice. Toss the rice around and add the soy sauce. Make sure nothing is sticking or burning. Add the scallions just before serving and toss them around to get them incorporated. Serve.

When something is stir fried it really shouldn't be in the pan for more than a couple of minutes, stir frying is an extremely fast and efficient way of cooking. We're not braising here folks.

Oh and here's a little present for y'all. Chicken nuggets and french fries with barbeque sauce. 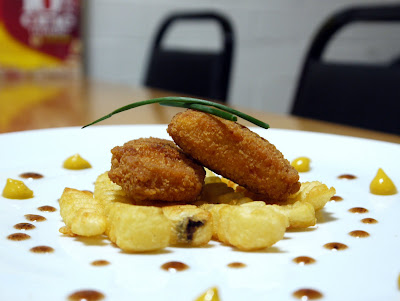 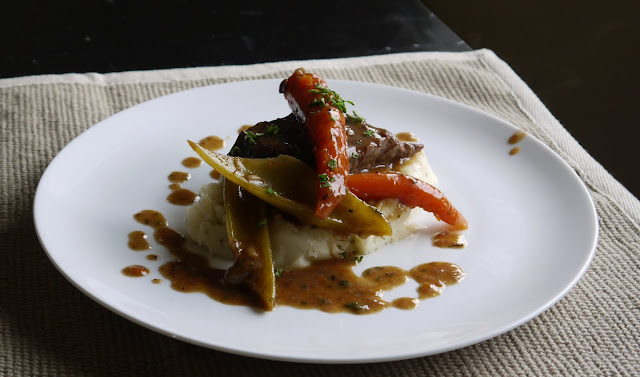 So one of my first recipes was for Boeuf Bourguignon and it was one of the best dishes I've ever made. Could it be improved? Yes of course, everything can be improved! Make the dish as you do in the recipe, but let there be a bit more liquid. Take the entire pot and strain the liquid into a saucepan. Add some tomato paste to the saucepan and reduce the liquid until it coats the back of a spoon and has approached demi-glace territory. Add the meat and large vegetables back into the pan and let them heat back up. Add a cold tablespoon of butter to the sauce and take off heat. Stir it in and what you're left with is a thick, incredibly rich, luscious sauce that beats anything else. This is the best sauce for mashed potatoes ever...
Posted by laurence faber at 7:37 PM No comments: 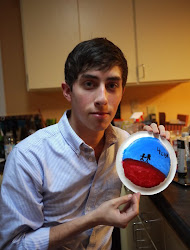 My name is Laurence Faber and this is me holding a painting!